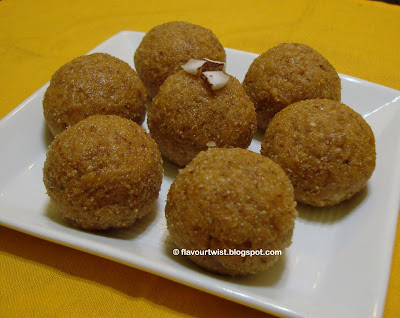 Method
Dry roast rice in a thick bottomed kadai, until it pops and turns golden brown colour. Remove from flame and spread the rice on a paper to cool. Grind it into a fine powder in a mixer and transfer it into a large mixing bowl. Keep it aside. Now grind together shredded jaggery and dessicated coconut in a mixer to form a thick mixture. Add this jaggery mixture along with cardamom powder and salt to the rice powder. Thoroughly mix all the ingredients together. Now make ladoos out of the mixture. 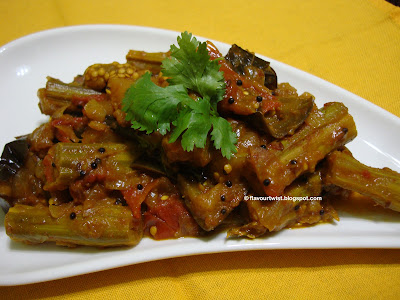 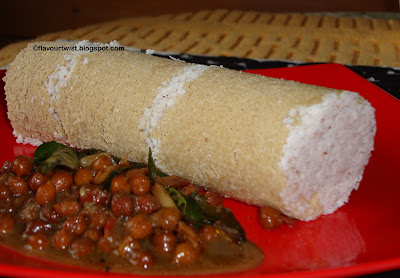 Ingredients Atta (wheat flour) - 3 cups Coconut - 1/2 ( grated) Salt Water Utensils Puttu Maker Method Dissolve about a tsp of salt in a cup of water, keep it aside. Take atta in a mixing bowl, gradually sprinkle salted water and mix, to moisten the flour.Sprinkling and mixing should be continued until atta is thoroughly moisten(or until small lumps appear).Stop sprinkling water once lumps appear. Keep this mix in refridgerator for half an hour.Take it out and run it in a mixer, to remove lumps. Place Puttu-kudam on the stove, fill 1/2 of it with water bring it to a boil. Meanwhile fill Puttu-kutti - a handful of grated coconut, followed by 3 handful of atta, then a handful of grated coconut, repeating the same until puttu-kutti is full. Close the lid and place it over Puttu-kudam and steam on high flame for 5 minutes and then on low-flame for 5 minutes. Healthy Tasty Atta Puttu is ready to be served with Kadala Curry/Cheruppayur Curry. 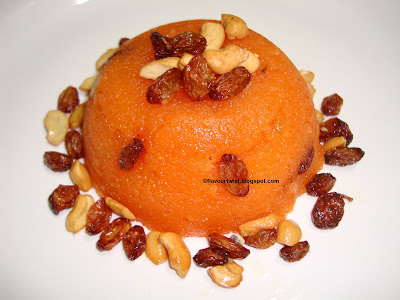 Ingredients Rava - 1 cup Sugar - 2 cups Water - 3cups Ghee - 3tbsp Oil - 1 tbsp Cardamom powder - 1/2 tsp Cashewnuts Raisins Food colour(Orange) - a pinch (Optional) Method Dry roast rava and keep it aside. Heat 2 tbsp of ghee in a kadai fry cashewnuts & raisins. Once done,take them out of ghee.Now add 3 cups of water(to the ghee in kadai), bring it boil. Add roasted rava and stir continously. Once it thickens and separates from the kadai add sugar, 1 tbsp of ghee and 1 tbsp of oil. Stir it for around 5 minutes. Add cardamom powder and food colour, stir to mix it evenly.Now add fried cashewnuts and raisins.Mix well. Delicious Rava Kesari is ready. Tastes yum while hot.